Explore the Community of

Aladdin, Wyoming is one of the few places one can see a historic general store from a bygone era.

While you are in town don’t miss the opportunity to enjoy a cold soda on the front porch, sit on the liar’s bench and explore the upstairs antique store.

The old fashioned general store also carries a quality assortment of clothing, jewelry, souvenirs and gifts. During the Sturgis Motorcycle Rally, the Aladdin General store comes alive with motorcyclists from far and wide for food, music and memory making.

During its heyday, Aladdin, Wyoming was comprised of about 20 houses built and owned by the railway and standing at the end of the rail line.

Bill Robinson built the Aladdin General Store in 1896 using lumber from PearsonSawmill. At first a saloon, the store served as a post office, train depot, barbershop, freight station, gas station and general location to purchase all items one might need.

Demand for coal in the gold mines of Lead and Deadwood, South Dakota brought the railroad to Aladdin.

In September of 1927 at a cost of $192,000 for the rail and associated equipment the railroad arrived in Aladdin. Three separate coalmines shipped via the train, loading at the tipple that still stands at historic Bakerstown near Highway 24 west of present day Aladdin.

Those wishing to travel at the turn of the last century could catch a stagecoach, or a train, in Aladdin, Wyoming.

Once a bustling community, Aladdin had its own baseball team during the community’s coal mining heyday.

For many years, trains stopped at a Y about a half mile east of Aladdin. In 1901 or 1902 the line was extended when John Pearson received a contract to furnish one million feet of timber for the Hidden Fortune Mine at Deadwood. As part of the agreement, he furnished the ties to bring the tracks all the way to Aladdin.

This railroad train made a trip to Belle Fourche, South Dakota, every day except for Sunday,” recalled Josephine Gervassi Hoffman in a 1969 edition of the magazine Bits & Pieces. Hoffman spent her childhood in Aladdin, Wyoming. “It left Aladdin at 10 a.m. and got to Belle Fourche between 11 o’clock and 11:30. Left Belle Fourche on the return trip around 1:00 p.m., arriving back in Aladdin around 2:30 p.m. It made connections with the Northwestern train that came in from Omaha, Nebraska.”

Hoffman recalls the school children, during the month of September, standing outside and watching the loading of cattle on the rail. “One would see herds of cattle in all directions waiting their turn at the loading pens. The cowboys would camp and keep watch over their herds.” Only able to pull 25 cars, Gervassi said the train made multiple trips during cattle shipping season.

The Aladdin Tipple, once used to load coal on the train that ran to Aladdin, can still be seen east of the Aladdin Community. Interpretive signs share the site’s history.

This wooden coal tipple is one of the last structures of its kind in the American West. It’s a great example of mining technology used in the late 1800s, constructed to store coal coming out of the mine and sort the resource as it moved down the chutes.

At the height of the town’s mining boom, the surrounding area had a population of 500 people. Very little coal was hauled after 1910 and the last train left Aladdin in 1927. The Aladdin General Store, however, has stood the test of time and continues to serve as the local place of commerce. 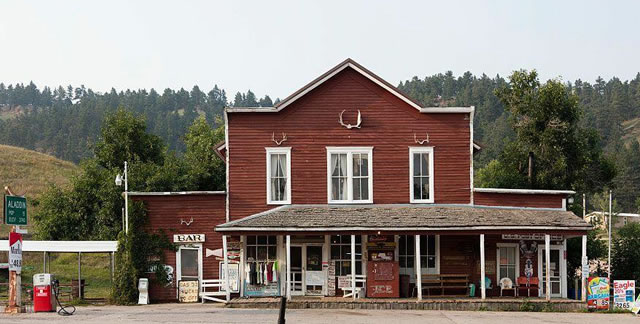 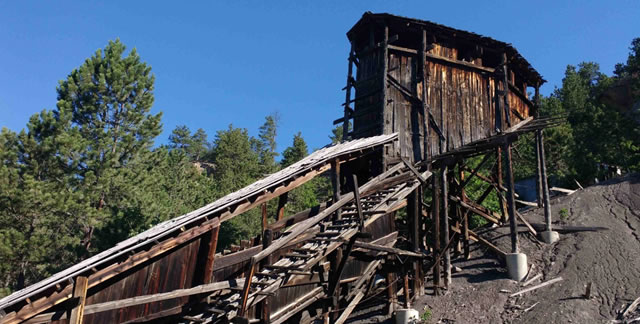 More area information is available from these sources.